What are our dreams really?

What are our dreams really?

How to discover the difference between dreams and "attachments".

A few months ago I met a person.

A dreamer, one of those souls full of ambition, the kind you look into their eyes and think: “it's people like you, the ones who make the world a better place”.

You know those people who tiptoe into your life almost as a joke and then end up turning your existence upside down? Well, she is exactly one of those people and she is fundamental in my growth path because she made me ask tons of questions about my future, and my dreams, right from the start.

A half realized dream

Those who know me know: one of my biggest dreams since I was a child has always been to be able to visit Australia. I don't know why, but the fact that it is so far away from everything, almost unreachable, has always fascinated me terribly.

So at the age of 20, right after I finished high school, I plucked up the courage to leave and go and fulfill what was my dream: to go and explore the land of kangaroos.

Although it was the most carefree and happy year of my life, it was also fraught with difficulties and saw me leave the continent early and reluctantly because of the covid.

On my return I saw the world crashing down on me and my eyes filled with sorrow at seeing my dream being swept away like that, and from day one when I set foot in Italy again, I have done nothing but wait for the time to be able to leave again.

The opportunity to return to the land of kangaroos finally presented itself to me almost two years later and the news, as much as it cheered me up and excited me, at the same time raised a thousand doubts.

Because in my early twenties I felt like a helpless little earthworm, bored of its city and its habits, trying to make a space for itself in the world, seek new inspiration, learn new skills, find new friends and new connections, simply run away from what was boring me and seek happiness elsewhere.

He did it for real. Australia made me the happiest man on the planet then, yet as I returned everything no longer seemed to make sense to me and I tried to fight back, yet I couldn't accept watching my dream slip away.

But life had to go on and one morning, while reading yet another article on travel, I came across a sentence that read:

“real change does not come about during the journey, but from the moment you are able to apply the teachings received elsewhere, at home”

I could not fully understand that sentence until I learnt to accept the reality of things, putting my heart at rest that at least for the time being my life had to go on in Italy.

The importance of reacting

I could not continue feeling sorry for myself and I learnt how to react.

Without realizing it, in short, I was doing exactly what I had been able to do in Australia in a year of my life but had never been able to do here in Italy in twenty years.

And the most absurd thing was that months and months later, I realized that I was happy again.

I was able to give more value to the things I took for granted, like having family and friends by my side, and I simply smiled when I thought I could never be happy again here in Italy.

What limits do our dreams have?

Despite this, my desire to return to Australia did not change. I continued to idealize my life there as happier simply because I had become accustomed to that idea, never questioning it, until I met this dreamy soul.

Jokingly, we always told each other that we should not have known each other because we were destined to separate because of different ambitions, yet we both knew that our meeting was special and fundamental in making us grow..

And it sent me into confusion because for the first time in two years I questioned my idea. I continued to be happy, more and more, and I started to wonder if I could feel the same happiness again in Australia and the thought froze me.

For the first time, my answer to that question was a clear-cut “no”.

I went through weeks of total confusion as, after spending several months convincing myself that this was my dream, perhaps, it was not for real.

Perhaps, I realized that that was just an attachment. A belief of mine that I would be better off there simply because that was how it was in my twenties – but the truth is that I changed enormously and I began to understand above all that happiness does not come from where you are, but from the people you surround yourself with.

And this person made me realize that probably, without her, Australia would not make me happy.

Is it a dream or an attachment?

I firmly believe that every person we meet in our lives teaches us something, big or small, and this dreaming soul simply made me realize that my desire to return to the land of kangaroos is probably just an attachment to a past idea I created in my head, and so I ask myself:

“what limits do our dreams have? More importantly, what are they really?"

The universe always has something bigger in store for us

In Australia I downloaded a song that soon became one of my favorites, it was a Stevie Winwood song called “Higher Love”, the refrain of which quotes: “bring me a higher love, where’s that higher love I keep thinking of?”

I remember listening to it on a loop thrilling me for the entire twenty-six hour journey back to Italy, and listening to it again now, two years later, made me realize everything: everything that makes us suffer happens because the universe has something better in store for us , and just as I thought Australia was my greater love, I now smile thinking that that greater love I was so searching for has arrived, and it is in the eyes of this great and precious dreaming soul who has changed my life, making it better.

I realized that Australia was a dream of mine, it really was, but dreams change and just as the universe holds something bigger in store for us, dreams too are probably destined to change direction, becoming bigger.

I have learnt above all that the future is uncertain and that it is OK. That dreaming is important and it's what keeps us alive, but that we must also be able to accept reality and understand that everything is offered to us to make us grow and that in the face of fear we must not give up, ever.

Have a good life!

P.s: I leave you below the wonderful Stevie Winwood piece I quoted above and I suggest you look up the meaning of his lyrics – personally it gives me the chills. Don't you think it's wonderful too?

If you liked the article and you think it might inspire people and help them in a concrete way, I invite you to share it using one of the buttons below and/or to leave a comment! 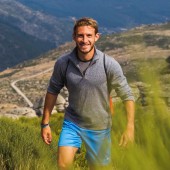 Art as a form of travel

Do you ever sit alone with your thoughts?

How to make the most of the present moment?

From today you can support my work by subscribing to my Spotify channel for only €0.99 per month!

By doing so you'll give me a big smile and help support my project, plus you'll get full access to all my best episodes!

Every wednesday new adventures to discover.
Follow me on the various social networks to stay up to date!

I created this simple and practical method to track all your travel expenses.
Download it for free from Pinterest!

Do you want to support me?

Your support motivates and accompanies me in my daily work but don't feel obligated to donate! Thank you for whatever you will decide to do.

Born in Ferrara, Italy, Be Adventurer is a blog of Alex Negrini
The main purpose of the site is to share and promote travel as a means of growth.
Tutti i diritti riservati © beadventurerblog 2022.